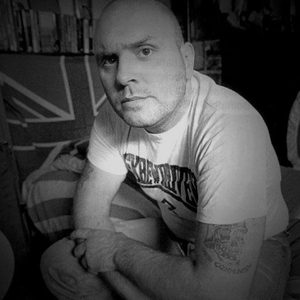 Stuart was born in Poulton-le-Fylde and was brought up in Blackpool, where he formed the band Skrewdriver in 1976. Skrewdriver was formed from the ashes of Tumbling Dice (a covers band who played material by The Rolling Stones, Free and The Who), and was inspired by Ian seeing the Sex Pistols play in Manchester. Skrewdriver at first had a punk image, and then they experimented with their look before eventually adopting the skinhead image.

Although both Skrewdriver and the band Sham 69 had skinhead followings and racist fans early in their careers, Skrewdriver failed to get the same mainstream promotion that Sham 69 did, possibly because unlike Skrewdriver, Sham 69 denounced their racist fans, and even performed at Rock Against Racism concerts. [3][4]

After the original Skrewdriver lineup parted ways in 1979, Stuart reformed the band and began to write for a white power skinhead audience, receiving a great deal of promotion from the far right. The new Skrewdriver was openly supportive of extreme right-wing groups such as the National Front and Combat 18, raising funds for them (and affiliated organizations) through their White Noise Records label. As a result, Skrewdriver became known for racism, patronizing the white nationalist political agenda, and helping to pioneer programs such as Rock Against Communism.

Stuart, along with Nicky Crane, founded Blood and Honour, a neo-Nazi network that distributes white power music and organizes concerts. Stuart became leader of two other bands, White Diamond and The Klansmen, He also released several solo albums, including Patriotic Ballads volumes 1 and 2 with Skrewdriver guitarist Stigger, which covered traditional songs such as The Green Fields of France.

Stuart was one of the principal organisers of a concert near Waterloo station in London in 1992. Anti-Nazi groups organized a protest, resulting in confrontations and a near riot. Shortly before this, Stuart had taken a part-time job at a supermarket to help pay his rent. His employers dismissed him from his position after the incident.[citation needed]

As a result of his work, Stuart became an influential person in the white power movement, helping it attract international attention. His voice could be heard on rock band No Remorse's 1989 album "See you in Valhalla" in the song The Invisible Empire (whose title refers the Ku Klux Klan). Female vocalist Saga released three Tribute to Skrewdriver albums after his death, and Skrewdriver is still one of the most covered bands within the white power music scene.

In September 1993, Donaldson was killed in a car crash in Derbyshire. He was 36 years old at the time of his death.