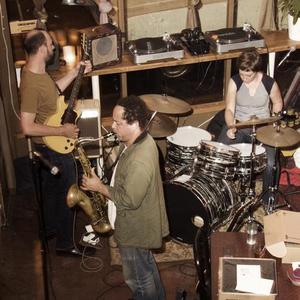 ?You can tell (or at least I can tell) when a band is playing together for the joy of it, for the love of rocking; where all other aspirations are secondary at best, where you never feel for a second that the band is trying to put one over on you. Hungry Ghost! This music is spare, honed down to essentials ? there is no faking it at this level. There's no need to know what hip, respected underground bands the players were previously members of at whatever time in the past ? this band doesn't really sound like them anyway; but suffice it to say these are real players, their cred is legit. The distillation of classic American forms (and I consider punk a classic American form, as much as blues and jazz) into a simultaneously familiar and individual sound is relatively common strategy, but in practice it is extremely difficult to pull off with anything resembling a natural, uncontrived result. Hungry Ghost! But then this isn't theoretical stuff ? you just have to hear it and feel it ? if you do this, it's there, I'm telling you! At which point they won't need me to justify it with verbiage.? ? Sam Coomes