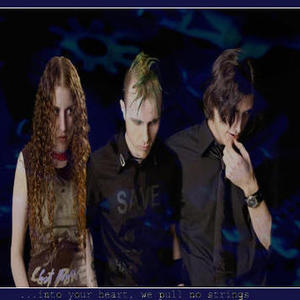 his mighty robot was a 4 piece alternative rock band based in NY, New York. The lineup consisted of Soda (lead vocals and guitars), H-Rocker (backup vocals and guitars), Mike 3.14 (bass and backing vocals, ) and George on drums. HMR were formed in 2003 by Soda, and saw a few lineup changes. Barrett Hiatt (drums & programming) performed and recorded with the group from 2004-2006. Barrett now works under the moniker Halo33 and plays in the band Revel Hotel. After heavy touring in the tri-state area, the band independantly released their debut 4 song EP, Open Your Mind, in March of 2005.

After heavy touring in the tri-state area, the band independantly released their debut 4 song EP, Open Your Mind, in March of 2005.

There is an obvious heavy influence from early nineties alternative music. Primarily The Smashing Pumpkins & The Cure.
A complete definition of the term "do it yourself", they have promoted, recorded, created their website, artwork, and merch, all on their own. Their live show is very intense.

In 2006 the band had begun to record their debut LP at Sony Studios in NYC. Changing their style from the programmed drums to live drums for this effort added to their intense sound that they previously only displayed live. Their first full length, entitled The Conflict, was released on Halloween in 2006.