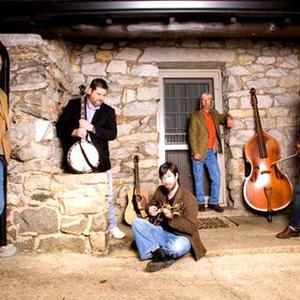 Named for the sweeping ridgeline that runs from Swannanoa to Black Mountain in Western North Carolina, High Windy is one of the area's fastest-rising groups. High Windy offers an original journey based in tradition, all the while breaking new ground in the genre. The group draws from a combination of contemporary and traditional bluegrass styles while adding old-time themes and an original approach.

The group draws from a combination of contemporary and traditional bluegrass styles while adding old-time themes and an original approach. In an area where great roots music is the norm, High Windy rises to the top, merging sophisticated arrangements with a style that is all their own. With over a dozen collective awards for their musicianship, High Windy are also selected members of the North Carolina Touring Artists Directory and the NC Music Heritage Directory. High Windy has shared the stage with nationally-recognized acts such as Mountain Heart, the Lonesome River Band, Special Consensus, Valerie Smith and Liberty Pike, Open Road and Hayseed Dixie.

Members of the Band Include:
Ty Gilpin originally hails from Goodlettsville, Tennessee where pickers such as Bill Monroe, who lived a few miles down the road at the time, influenced him at an early age. He relocated to the Asheville area in 1995 where he started playing professionally with local groups such as Second String Bluegrass. Ty Plays mandolin, writes and manages for the group. He currently works for Crossroads/Mountain Home Music doing sales and promotion for such groups as Doyle Lawson and Quicksilver, The Lonesome River Band, Jerry Salley, Kenny and Amanda Smith and more.

Tim Gardner of Brevard, NC comes from an old-time fiddle background, but in recent years has become a versatile multi-instrumentalist who has ventured into other genres that include country, Celtic, classical, and of course, bluegrass. He learned many of the fiddle and dance tunes in his repertoire from his parents, Lo and Mary Gordon, who are well-established figures in the old-time music community.
Tim has traveled to fiddler's conventions with his family since he was the age of seven and has won or placed in many fiddle competitions throughout North Carolina and in his native state of Florida. During the day, Tim works for his dad at Cedar Mountain Banjos building some of the finest open-back banjos on the market.

Mark V. Davis is a native resident of Asheville, North Carolina. Mark perfected his skills as a musician in high school playing the trumpet. He received the John Phillip Sousa Award for top musician in his graduating class. Mark comes from a long line of bluegrass musicians and has been around bluegrass music all of his life. His first performance on stage was in 1974 at the Shindig-on-the-Green.
Mark comes to High Windy after performing with the Asheville Bluegrass, an award-winning band formed by his father John Davis in 1968. He has played with known bands such as Appalachian Bluegrass, The Stoney Creek Boys, Hazel Creek and The Snowy Mountain Boys. Mark has been playing the bass, mandolin and guitar since the young age of 12 and has received numerous bass fiddle and bluegrass band awards. Mark enjoys playing all types of music but his heart belongs to bluegrass. Mark brings a blend of strong bass playing, lead and harmony vocals to High Windy.

Patrick McDougal, a second-generation musician, now owning and operating MUSIC PLUS STUDIOS In Hendersonville has played banjo professionally for many years. Born in Charleston, SC he grew up watching his father, Robert McDougal, perform at the Grand Ole Opry in the late sixties and early 1970?s. In the past Patrick has performed with such notable musical talents as Herschel Sizemore, Jimmy Haley, The Blue Dogs, and country star David Ball. Patrick is also an accomplished songwriter. His work has been performed and recorded by the likes of Dan Tyminski,, Del McCoury, Alan Biby
and Blue Ridge, The Lonesome River Band, Jeanette Williams Band, Dixie Creek Revival, and The Blue Dogs. Many of Patrick?s songs have appeared on the top ten bluegrass charts.

Shane Lail was born in the foothills of Burke County, NC and raised in the mountains of Madison County, NC. He began playing guitar when he was 15 years old. Shane traveled and had a lot of good times in his first band The New Asheville Grass. This band went west to Grass Valley, CA and opened for the Tony Rice Unit. Later Shane joined Hazel Creek and focused on his singing skills. This group opened for such well-known bands as Doyle Lawson and Quicksilver, IIIrd Tyme Out, and Blueridge.
A highlight of Shane's musical career was joining Alison Krauss and Union Station on stage at East Tennessee State University. Shane enjoys spending time with his wife and children when not on the road. Music occupies most of his time, but when he is home in the mountains, he tries to make some time to search the hills for Native American artifacts.