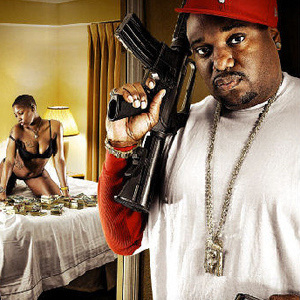 Bay-Area Rapper outta San Francisco. Guce stepped into the rapgame in 1995 with "Pure Pressure" a classic in the history of westcoast rap. Other important albums are "Clear & Present Danger" (1996), "If It Ain't Real It Ain't Official" (1998), "Bully's Wit Fully's" feat. Killa Tay (2000). After this time he's influenced by the hyphy-movement which dominates the bay area rap-music nowadays. You can listen to his new style on albums like "Controversial" (2000) and the 3rd Part of Bully's Wit Fully's: "The Infrastructure" (2006) on which he collaborates with Messy Marv in place of Killa Tay.

Guce vs. G-Unit. In a interview with The Rap Hype, Guce explains his inherited beef from the feud between Yukmouth vs.The Game. The Feud esculated when Obie Trice a memeber of Shady Records went to KMEL Radio Statio and said," in San Francisco I have to cover my ass." A diss track was released by Guce and Messy Marv "50 Explainations" on the album Pill Music. 50 cent and Sha Money XL exchanged words over the phone with Guce's camp. Guce says, "it's over with, and it never kicked off"

If It Ain't Real-It Ain't Official