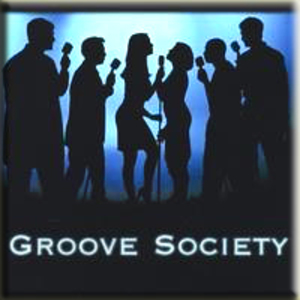 Groove Society is an award winning vocal sextet with a growing reputation for their excellence in jazz and a cappella singing. Thoughtfully crafted arrangements, masterful use of extended harmonies, intricate rhythms and exhilarating improvisations characterize this ensemble's unique sound. With the release of their new CD, Groove Society is receiving radio play from coast to coast and around the world. They have appeared at major international jazz festivals across the Mainland U.S.

With the release of their new CD, Groove Society is receiving radio play from coast to coast and around the world. They have appeared at major international jazz festivals across the Mainland U.S., Hawaii, and Canada, sharing the billing with, and/or opening for top artists including Bonnie Raitt, Herbie Hancock, Bobby McFerrin, The Neville Brothers, Eddie Palmieri, Paquito D'Rivera, Freddy Cole, Patty Austin, The Rippingtons, Bobby Hutcherson, Jimmy Heath, The Dirty Dozen Brass Band, Dr. John, The Bad Plus, Paul Taylor, Nelson Rangell, Soulive, and Styx.

Other than their voices and bodies, Groove Society uses no musical instruments of any kind. Enthusiastic audiences are amazed that such a powerful and rhythmically complex sound can come from just six people with microphones. Former members of the University of Northern Colorado's Grammy nominated ensemble, Vocal Jazz 1, formed the group in 2002. With degrees ranging from vocal performance to music education to theory and composition, they have combined their talents to create a dynamic group that captivates audiences and finds itself in demand. The group's repertoire includes the full spectrum of jazz styles as well as R&B and popular music infused with modern jazz harmonies.

In addition to their busy performing schedule, Groove Society also works in education, giving workshops and clinics to high school and college students. Individually, members are involved in a variety of projects including solo performances and recordings, teaching, adjudicating, writing and arranging. The group hopes to continue to explore all styles of music and expand their audiences for years to come.