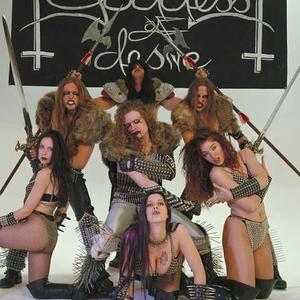 What began in 1995 as a fun idea turned out to become a serious band after winning several prizes at festivals. The purpose of the band's formation was to bring back the glory days of heavy metal during the 80's by playing cover songs from this era while performing a bizarre sensual-macabre show. Because of this, Goddess Of Desire has been named the cult show-metal band from Holland! At first, Goddess Of Desire played traditional metal covers, but later started to write their own compositions in that style.

At first, Goddess Of Desire played traditional metal covers, but later started to write their own compositions in that style. Their fourth gig already aired on Dutch TV and their eighth gig was the first to be shown across the Netherlands' borders. Journalists described the band as a shock-rock sensation and were even banned a few times from performing in some places because of their controversial content and/or lyrics. Slowly, Goddess Of Desire became a band on high demand with a professional show. All of their efforts finally resulted in the release of their first album, "Let Us Win This War".

At that time, Goddess Of Desire performed many of their own headliner shows but has also supported other bands including Destruction, Gwar, Therion, Rockbitch, and Gorefest. The band's shows also became well known in the European metal scene due to very successful appearances in front of thousands at Dynamo Open Air in 1997 and Wacken Open Air in 1998. Additionally, they were noticed by several Dutch TV stations who broadcasted their concerts. In 1998, their first headliner tour across Germany was completed with massive success.

In 1999, Goddess Of Desire signed with Metal Blade Records who released their second album, "Symbol of Triumph". By the end of 1999, Goddess Of Desire, along with Tankard, supported Sodom on their tour through Germany. In the following years, the band released their third album, "Conquerors Divine", and continued to perform at numerous heavy metal music festivals such as With Full Force, Summer Breeze Open Air, and Bang Your Head.

In 2005, Goddess Of Desire signed with Armageddon Records who released their fourth album, "Awaken Pagan Gods", and, for a second time, performed at Wacken Open Air. In 2006, the band went on a full European tour with the Latvian pagan metal band, Skyforger, and the Swedish viking metal band, M?negarm.

Goddess Of Desire has already done two different shows, "Erotica & Hell on Earth", and is now performing their third show called "Warrior Goddesses". It is brought by making the stage more macabre with a background with lots of skulls, chains, torches, and pyrotechnics. Artificial light is minimized to create a dark atmosphere. Then, in front of the audience, the band members begin thrashing out dressed in spikes, leather, bullet belts, and fur. During the show, the female band member, Delilah, comes on stage dressed up as a warrior goddess who dances with swords, breathes fire, and incites the excited audience.

Goddess Of Desire is a band you have to see at least once in your life!