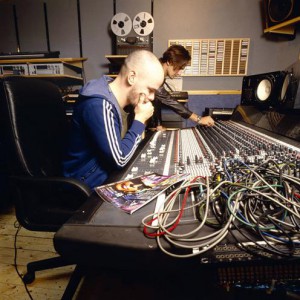 Notoriously enigmatic and often disdainful of the press, the group's Garry Cobain and Brian Dougans worked their future-is-now aesthetic into a variety of different fields, including film and video, 2- and 3-D computer graphics and animation, the Internet, radio broadcast, and, of course, recorded music. Although they usually disdain their earlier work as play-for-pay club fare not representative of their later musical vision, many of the thematic concerns of their earlier 12"s and their first, heavily dance-oriented LP, Accelerator, followed them into their later work. Usually filed under ambient, that work is often much more than that, drawing from the history of experimental electronic music with a relentlessness that has helped to push the calmer elements of that genre's reputation into decidedly more difficult directions.

The pair also grew in repute as remixers, obliterating tracks by Curve, Jon Anderson, David Sylvian and Robert Fripp, and Apollo 440, and rebuilding pieces of almost majestic complexity with the remnants. The duo's works of the mid- to late '90s -- Lifeforms, ISDN, and Dead Cities -- were important stopping points on the road of rabid hybridization characteristic of post-rave European experimental electronica (ambient, jungle, trip-hop, ambient dub, etc.), and the pair's somewhat punk rock attitude (despite their success) did much to underscore the scene's underground roots. After a lengthy hiatus marked by rumors of mental illness and a cottage lifestyle, Cobain and Dougans returned in 2002 with The Isness, a record heavily influenced by '60s and '70s psychedelia. ~ Sean Cooper, All Music Guide

From The Archives Vol.4

From The Archives Vol. 3

From The Archives Vol. 2

From The Archives Vol. 1

Teachings From The Electronic