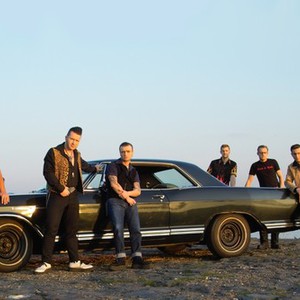 Foggy Mountain Rockers is a German rockabilly band that has been active since 1992. It all started in a little yard shed in the year 1992 where five Rock 'n? Roll maniacs out of the area around Bonn, Germany got together to start a band. They tried a lot of different things, discussed back and forth trying to find their style. They didn't just want to cover but were determined to create their own music, incorporating each musician's favorite feel in order to produce their own compositions based on motives of the British Teddyboy Rock 'n? Roll with influences of Skiffle and Country music.

It all started in a little yard shed in the year 1992 where five Rock 'n? Roll maniacs out of the area around Bonn, Germany got together to start a band. They tried a lot of different things, discussed back and forth trying to find their style. They didn't just want to cover but were determined to create their own music, incorporating each musician's favorite feel in order to produce their own compositions based on motives of the British Teddyboy Rock 'n? Roll with influences of Skiffle and Country music.

The small yard shed was only a temporary ?new home?. When J?rg ?Paul? Webber joined the band as second guitarist, he offered his parents' basement as a new place to jam. At around the same time the drummer was replaced by an ideal alternative: Sven Sch?rmann.

In this set-up the band performed their first concerts in the Cologne/Bonn area. In the year 1993, through the achievement of a 3rd place at the Rock 'n? Roll-Newcomer-Festival in Bielefeld, the band became known in regions beyond their home base as well. The five musicians now released their first sample recordings.

?Paul? had to leave the band at the end of '93 for personal reasons but an adequate replacement was soon found in the experienced Rockabilly guitarist Marko Jahnke who had previously played together with Jummi in the band ?Raw Bop Trio?. In 1994 the band recorded their first album ?Hang Him High? for Pin up Records. Unfortunately ?Pin up Records? decided to cease their production of Rock 'n? Roll records and never released the album. The five hopefuls were utterly disappointed and suffered their first real setback. Nevertheless, the band drove on and was soon booked for several live performances.

Their program was now already quite ample and became even more so when sax player Thomas ?Sax? Schmitz joined the band in 1995. When Jummi had to take a break from the band due to job conflicts, Thomas also took over his part. In this line-up the band recorded their album ?Dice in Flames? for Castle Records. This record, which was supposed to be their second, now became their first. The acceptance of the album was so great that the band had plenty to do to meet the requests for live performances. Not only were in-scene gigs in store for them but the nonaligned audience were giving them attention as well leading to performances at the ?American Embassy Club?, among others, and their first gigs outside of Germany.

Thomas left the band at the beginning of 1998 so the Rockers knocked on Jummi's door again to get him to come back. Jummi had felt that familiar tingle in his fingers again for quite some time and didn't hesitate to go dig out his bass guitar out of the basement and show up for the next practice. It didn't take long for all of them to realize that this original set-up was the ideal one. At that time the band felt a real surge go through them, felt inspired to reconsider their approach. They tried out new things, redid some old songs and picked up again some of their former projects which they hadn't dared to tackle so far. After many practices and performances of their new songs they knew it was time to go back to the studio. It had to be a professional studio, one that would be appropriate to make their songs sound as best as they could be. With their tracks in their pockets they went to see Stefan Pfeifer again, owner of ?Castle Records? (vinyl) and ?King Ed Records? (CD and recorded their album ?Angel Heart?. The good critics and the number of sales attest to the success of the album.

In the summer of '99 the band was looking forward to performances in sunny Spain. The Rockers were sincerely shocked when they learned that guitarist Marco would not be able to accompany them because of job conflicts. The search was on for a suitable replacement and there wasn't much time. A man more at home in the Rock and Blues scene of Bonn proved to be the rescue and perfect replacement: Ingo Goerges. Which other musician and not even from the Teddyboy scene, would be able to play 40 songs, all unknown to him, within a matter of seven weeks? (Super Ingo!!!)

Despite their ever chaotic and comical way, a lot of Lumumba, Sangria and vicious sunburns, the tour turned out to be a downright rockin', successful trip. Back in Germany the band received good news. The previously recorded and never released album ?Hang him High?, which ?Part Records? had in the meantime obtained from the stock of ?Pin up Records?, was finally going to be published. But, like usual, good and bad news goes hand in hand and the band had to learn that guitarist Marco would not be able to play for quite some time due to lumbar disc problems. That was about the worst that could happen since there were several performances scheduled. Moreover, Marco also had job conflicts and mentioned that he was forced to put the emphasis on his job. There was only one alternative: Ingo.

He could not only play guitar, he was also crazy enough for this band, something which the band had found out on their tour in Spain.

In this line-up the band performed many international live gigs and produced their single ?Teddyboy Rocker? in co-operation with Part Records in the spring of 2000. With this piece of vinyl, which was finished in time for their performance at the ?Wildest Cat in Town Weekender? at the London Tennessee Club, the band managed to hook-on seamlessly to their success of the ?Angle Heart? record.

Because with this sound, you can't help but make friends!

You know you're successful when the number of gigs are starting to become more and more and the fan community starts to grow. More and more, the Foggy Mountain Rockers were invited to bigger festivals like the ?International Rock 'n? Roll & Rockabilly Meeting 2000 (Munich) or the ?Teddyboy-Weekender? (Great Yarmouth, England). The English Rock 'n? Roll magazine ?Velvet Collar? produced a live video in co-operation with ?Trashville Films?. The performance at the ?Rock 'n? Roll Weekender? was captured and released on VHS under the title of ?Trying to be the Only One?. Two songs were contributed to the Weekender Sampler ?Rockin' around the World? (Teddyboy No. 9).

In the beginning of April in the year 2001, after having performed many, many gigs and after much practice, it was time to go to the studio again to record an album. The practice paid off, all 14 tracks of the album were recorded within only 4 days. ?Dressed in Black? was the name of this new master piece, produced once again by ?Part Records?. It was once again finished just in time before a festival. The album was first sold at the ?Austrobilly-Meeting? (biggest Rock 'n? Roll meeting in Austria) and found many eager buyers. A few weeks later the album was also released on vinyl this time in co-operation with the Frankfurt based company ?Label Diablo Records?.

During the same year, the band performed again a few gigs in England and, for the first time, in Italy. In addition to the festival the band was booked for there, they also played in some club where there was only 1 Rock 'n? Roller amongst an audience of about 200. I guess you can call it a successful night when everybody in the audience starts dancing on the table, gives you standing ovations and enthusiastically demands ?We want more!? at the end of the gig.

For the 10th Anniversary Party at the Niederkassel-Mondorf hall ?Zur Post? (near Bonn, Germany) on August 24th, the band released their first self-produced album ?Ein Herz f?r Teds? (Have a heart for Teds). It contains songs of bands and singers which had greatly influenced the music of the Foggy Mountain Rockers. Songs that the Rockers also like to play during their gigs. It also contains 4 bonus tracks of songs which the band had taped during their first recording session in 1993. One of these songs had never been released before, another had never been released in this version.

Other releases in 2002: An alternative version of ?Early Morning Rain? on the EP in the magazine ?Dynamite? (No. 31) and the sold-out vinyl album ?Dice in Flames? was published on CD on ?Tombstone Records?.

In 2003 the Foggy Mountain Rockers released their Live DVD ?Live at the 10th Anniversary Party? between a lot of gigs all over Europe. Promoters from the Netherlands and Sweden booked them for the first time. They returned to Italy, Austria, France and of course to England where they performed at ?Ready Teddy Go?-Weekender (Cleethorpes) and for the 2nd time on the ?Wildest Cat In Town?-Weekender.

In the winter month 2003 Foggy?s stopped playing live for a while. They rehearsed a lot and in January/February 2004 they recorded their new album, that will be released in spring/summer 2004.