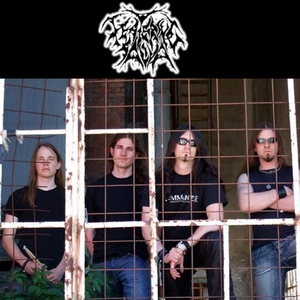 The band "Festering Saliva" was founded in 1997 in the east of Munich/Germany aiming to play brutal Death Grind. The original name Arbitrary Bloodshed was changed to Festering Saliva in 1998 as the first line-up was completed with Olli. Quickly afterwards the first Demo-tape ?old Christian soul? was released in 1999 followed by a triple-split Album with the Munich grindcore maniacs of Cryptic and Vivisection also in 1999.

Quickly afterwards the first Demo-tape ?old Christian soul? was released in 1999 followed by a triple-split Album with the Munich grindcore maniacs of Cryptic and Vivisection also in 1999. After the release of the first full-length album entitled ?the isle of nightmares? in 2001 (released via Lost Agony Records) and the following tour there happened a deep cut in the history of the band. Several changes in the line-up an especially the integration of a second guitar player lead the band to leave its former way of playing brutal death grind.

In the last months of 2004 ?Festering Saliva? entered the studio to record their new album ?realm of the forgotten?. With that album the band connects the traditions if Swedish, US influenced an British Death Metal and presents its way of playing this kind of music also in stage with power and aggression.


Currently the line up consists of:

Up to date "Festering Saliva" played round about 150 gigs (including 3 Mini-Tours) in Germany and contiguous abroad with bands like Six Feet Under, God Dethroned, Tankard, Hypnos, Obscenity, Equilibrium, Soul Demise, Profanity and much more and also played at some festivals like "Walpurgis Metal Days", "Metal Meridian", Grind Up The Forest", "Brutal Noise" or the "Happy Cadaver".

Furthermore an 8 min horror-video-clip was filmed for the title-track "The Isle Of Nightmare".

At the end of 2003 "Festering Saliva" played the "Blasting Bavaria tour" with Creamation, Fetus Christ and Illegimitation".

The releases of "Festering Saliva" got positive reviews in almost every well known magazine (like Ablaze, Legacy, Eternity, Rock Hard, etc.) and Fanzines, and their stuff is available worldwide via some mailorders.

Realm Of The Forgotten

The Isle Of Nightmares