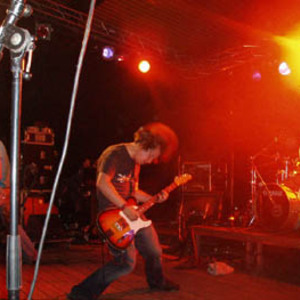 Featherstone is a fresh band out of Oslo, playing contemporary rock music. The band was formed in the cold spring of 2003, at the time as a trio. Ola, Eirik and Michael, being from the town of Hamar, knew each other from before and frankly had nothing better to do. Since both Michael and Eirik were singers and songwriters from before they joined their talents and developed what is Featherstone's trademark: the vocal harmonies of two lead singers.

Finding a bass player was the next challenge for the band. They got hold of Hans Christian; a former guitarist turned bass player from the icy north of norway. Finally all the players had joined the game. Now they had some serious practising to do. There hasn't been any shortage of songs to play. On the contrary. It may have been too many of them. The core melodies and lyrics are written by Eirik and Michael but they usually end up sounding a lot different after the rest of the group get their hands dirty with them. Featherstone's songs combines the opposites of mellow and dramatic, pop and rock, and comes out as a dynamic and fresh contribution to the growing norwegian scene. Inspiration comes from various bands that the members like more or less in common. The grunge era has most definitively had a lot to do with the way the music sounds. So has modern rock bands like Muse, Radiohead, Foo Fighters and My Vitriol. As the songwriting has improved, so has Featherstone's own sound emerged.
You can still hear their inspirational bands in the songs but there definetely is something Featherstone about them.