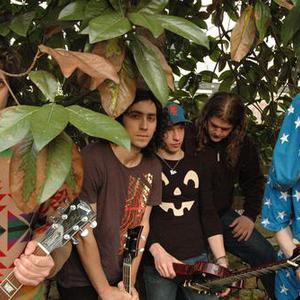 Fang Island began, oddly enough, as an art school project while the band members were attending the prodigious Rhode Island School of Design (also the foundation for Yeah Yeah Yeahs, Les Savy Fav, Lightning Bolt, Six Finger Satellite and some band called Talking Heads) in 2005. They were later joined by Jason Bartell, Marc St. Sauver, Michael Jacober, and Nick Sadler who was formerly a member of fellow Providence-based band Daughters. According to guitarist Jason Bartell, the goal was to "make music for people who like music." That is, music without irony that harnesses its uplifting qualities. Just like a classic rock song or classical symphony can stir us emotionally, Fang Island exists to unlock that spirit. The band got its name from an article in The Onion. Jason Bartell recalled, "I think it was just a funny blip about Donald Rumsfeld having a secret hideaway, and it was on Fang Island. We like how it was sort of this, like, fictional space that we imagined our music was played on".

Fang Island was released on February 23, 2010 via Sargent House, and was heralded as one of the year's top albums. MOJO praised the band for being "simply killer fun?, while The 405 described the album as ?A joyous stomp with bouncing drums and tightly played guitarmonies... a real winner" and named it one of the best albums of 2010. Pitchfork called the music on Fang Island "honest and life-affirming and infectious", tagging the album with the high praise of ?Best New Music?.

In March 2010, the band performed at the SXSW music festival in Austin, Texas, and were named by social networking analytics site Next Big Sound as the artists who experienced the fastest growth in online fandom during the festival. Following their rapid gain in attention, the band spent the remainder of 2010 playing a plethora of shows including support for The Flaming Lips, Stone Temple Pilots, Matt & Kim and numerous headline shows across the North America, the UK and Europe.

Whereas Fang Island described their debut as "everyone high-fiving everyone", their highly anticipated follow up Major is evermore confident, triumphant and brimming with infectious enthusiasm. Its warm harmonies are given proper berth with more expansive dynamics and focused pop song craft.