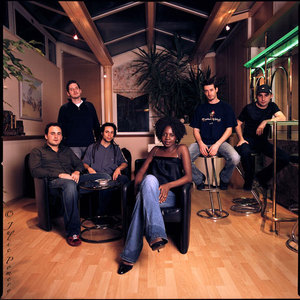 A wolf in sheep's clothing. Six of the most sought-after musicians on the french musical scene. Since 2001, Electro Deluxe have evolved from their early electro-jazz sound to a energetic cocktail of dirty soul & funk with a touch of class. After ten years of criss-crossing the globe (China, India, Canada, Mexico, Europe) and performing at some of the most prestigious festivals (Montr?al Jazz Festival, Jazz ? Vienne, Cervantino, Solidays), Electro Deluxe celebrate their tenth anniversary with the release of the double album Live in Paris, recorded with the full artillery of their Big Band.

A reservoir of musical talent, and inspired by the mythical ?Funk Brothers? of Motown lore, Electro Deluxe work as studio musicians for among others, Universal & Motown recording artists, Ben Oncle Soul and Hocus Pocus, who have equally participated on our records.

At the heart of the groove scene and with the ability to cross-over into other genres, Electro Deluxe have enjoyed modest success in their hometown of Paris, France, with each of their last 2 albums topping the jazz charts in France while performing entirely in English.

More Deluxe than Electro, and not bound to any one musical reference, they continue to push the boundaries of their music.