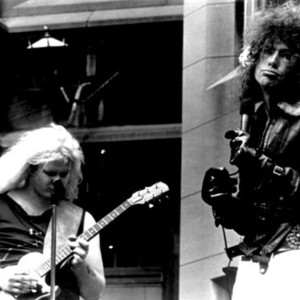 The Electric Eels were formed by John Morton (guitar), Dave "E" McManus (vocals, clarinet), and Brian McMahon (guitar), all ex-pupils of Lakewood High School, Cleveland, in 1972. The three had been to see a Captain Beefheart gig and been unimpressed enough by the support band to decide that they could do better themselves. Morton was also influenced by free jazz: "I remember listening to Ornette Coleman, John Cale, Sun Ra and Albert Ayler.

That's what the Eels was supposed to be, but we didn't really understand it." This had also led to early meetings with Peter Laughner of Rocket from the Tombs at the local record store.

The Electric Eels featured unconventional instrumentation initially, with no drummer nor anyone who was technically competent on any musical instruments. Nevertheless they played glam rock, which was popular at the time in England, and were heavily influenced by bands like Sweet, T. Rex, Slade, and Roxy Music, as well as Ziggy Stardust era David Bowie, and the New York Dolls. Their rare performances did feature at various times, sheet metal hit with sledgehammers, anvils, a power lawnmower and fist fights. This led to the description of their act as "art terrorism". Much of 1973 and 1974 was spent, mostly unsuccessfully, trying to get gigs in bars that normally booked top-40 covers bands in Cleveland and then Columbus, where the band moved for some months. Morton has claimed that this move was caused by death threats he had received in Cleveland for sleeping with "one too many married women". When gigs did happen, promoters were known to pull them half way through. On their debut show the band were arrested by police for being drunk and disorderly. Morton resisted arrest and gained a broken hand, which caused him to play their next gig, three weeks later with an improvised splint made from a slide rule and a wrench.

Morton, in particular, had an inclination for violence that often led to physical fights and temporary splits in the band, or he and Dave E would go to a working-class bar and provoke a fight by dancing together as if a homosexual couple.

In late 1973 McMahon left the band, replaced by Paul Marotta, who was a competent musician on both guitar and keyboards. Drummers came and left during the history of the band, but bass guitar was always absent.

The deliberate provocation and controversy of the band also saw them use the Nazi imagery of the swastika, Morton later claiming that this was influenced by William Burroughs and Lenny Bruce: "That is something we wanted, to have that provocation, we wanted to confront those issues." In addition, controversial lyrics taken from American Nazi Party racist literature were used in the song 'Spinach Blasters' (AKA 'Spin Age Blasters'). Marotta: "It was shock tactics, it was confrontational art, it was meant to be satire". This presaged the use of similar shock tactics and images by other punks in New York and London, such as Sid Vicious and Siouxsie Sioux, as well as nonpunk glam rockers like David Bowie.

Eventually the Electric Eels got a gig at a Cleveland venue which would support original music, The Viking Saloon's "Special Extermination Night" 22 December 1974 with Rocket from the Tombs and Mirrors. This gig marked the public start of the Cleveland proto-punk scene. However the repeat event in January 1975 would see the Eels banned from the last bar that would have them, due to their use on stage of a gas-powered lawnmower. This led to the departure from the band of Marotta.

After Marotta left the band, Brian McMahon rejoined and they also recruited drummer Nick Knox, later to find fame with The Cramps. They made their peace with Marotta, who went on to record some of their rehearsals in early 1975. It is these sessions which make up most of the Eels material released since their demise, including the 1978 Rough Trade single 'Agitated' b/w 'Cyclotron', which was their only released recording for many years. The song 'Cyclotron' has a lyrical reference to Elton John whose music and style often crossed over into the glitter rock scene.

However, the Knox line-up of the band was short-lived, performing only one gig - the bands 5th overall - at Case-Western Reserve University in 1975 (sources differ as to whether this was in May or September of that year), before finally splitting there and then due to a Morton-inspired fist fight.

Later that year the original three Eels members, Marotta, and two members of Mirrors formed a new band 'The Men from UNCLE', but this lasted only two rehearsals before splitting again. Marotta went on to form The Styrenes, of which Morton was also an occasional member.