Dusty Rhodes And The River Band 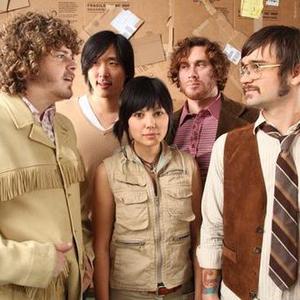 When one thinks of the contemporary Orange County independent music scene in Southern California, acoustic guitars and violins, bluegrass and folk compositions, and references to '60s and '70s hitmakers aren't typically the first notions that come to mind. But that's where a musical collective like Dusty Rhodes and The River Band come in. These six musicians single-handedly altered the perception of independent music in their locale (and beyond), getting involved in a genre that's largely more comfortable with Marshall half-stacks than mellow accordions.

But that's where a musical collective like Dusty Rhodes and The River Band come in. These six musicians single-handedly altered the perception of independent music in their locale (and beyond), getting involved in a genre that's largely more comfortable with Marshall half-stacks than mellow accordions. And it's only furthered by the release of the band's debut full-length, First You Live.

Partially named after vocalist/accordion player Dustin Apodaca's original stage name (Apodaca adopted the brand name of his instrument, a Rhodes keyboard), and also from the Santa Ana River that runs adjacent to the band's neighborhood, the group launched in 2002, after guitarist/vocalist Kyle Divine moved to Orange County from Kansas. After meeting Apodaca and consequently falling in love with his demo tapes, Divine quickly realized that a band ? with a unique melding of the pair's influences ? had to form.

"It all revolved around watching 'The Last Waltz' when we first started hanging out," Divine says. "Just falling in love with that kind of '70s classic rock and wanting to take the band in that direction. There's a lot of country and bluegrass stuff from my end that kind of worked its way into the band. [Apodaca] was a huge fan of prog rock, like Yes, Emerson Lake and Palmer, and King Crimson, and that's where all the really prog stuff comes from."

With Divine on drums at the time, the act played its first show in 2003. However, shortly thereafter, things changed with Apodaca adding an accordion to the mix, and Divine moving to acoustic guitar. Next came the task of rounding out the line-up, which eventually yielded its current sextet setup. Dusty Rhodes and The River Band became regulars in the scene, performing locally and self-releasing limited-edition recordings all the while building its rabid following in true DIY fashion. But things changed for the better when the band performed its residency at West Hollywood's Key Club, which found them attracting management and ultimately, a recording relationship with SideOneDummy.

It was around this same time that the group had wrapped sessions for First You Live, which first began in 2006 with noted producer Ikey Owens, keyboardist from The Mars Volta.

Predominantly tracked live on analog tape, First You Live was recorded between Owens' busy touring schedule. The album's title, also lifted from one of the tracks, summarizes the prevailing concept of the collection, with most songs revolving around themes of both life and death.

Conceived between the band's three primary songwriters ? Apodaca, Divine and guitarist/vocalist Edson Choi ? the album's diversity is its strongest suit. From delicate balladry to bold, stomping instrumentation to the classic rock hints of The Band and The Beatles, First You Live is a culmination of both musical and life influences. For example, there's the gruesomely biographical "Grampa Mac," which Divine notes is a true story about his own great grandfather, who killed Divine's great grandmother, his second wife, and killed another man for cheating on his third wife.

And that's just a sample of the band's overall honesty, which appears on all ends throughout First You Live. No gimmicks, no fluff, just the genuine article.