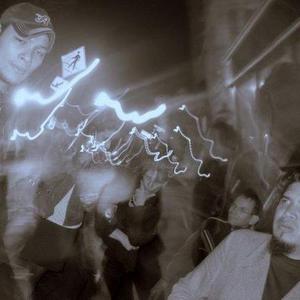 "For me, great records are always about salvation, redemption, reflection, the dirt and the beauty, living through your own trials and experiences," says Rob Garza, one half of electronic music pioneers Thievery Corporation and the brains behind his new solo project Dust Galaxy, "What I love about some of my favorite records like "Sandanista," "Sgt. Peppers," "Odyssey and Oracle," and "Sunshine Superman" is the way they drift through different musical temperaments.

Having spent the past ten years creating, producing, remixing and touring as part of Thievery Corporation, Garza has worked with, and been influenced by an endless list of diverse artists. "Through the course of working as a producer in Thievery Corporation, I've had the opportunity to work with many talented singers and instrumentalists. During this time period, I've also learned to play more instruments myself. This project finally allows me to step out from behind the control booth to continue expressing myself as a songwriter as well as a performer and musician."

Which brings us to his latest creation, Dust Galaxy. "After the completion of the last Thievery record and tour, and a trip to Sudan for the UN World Food Program (for which he and Eric Hilton from Thievery are spokesmen), I was ultimately inspired to make a very personal musical reflection of my continuing journey." In recording Dust Galaxy he enlisted producer Brendan Lynch (Primal Scream, Paul Weller) to push the UK take on older American sounds with more grit and psychedelia.

Says Garza, "I loved Brendan's remixes like Mathars "Indian Vibes," and the remix he did of Thievery's "Revolution Solution" as well as his production work, and thought he would be the best fit to get the sound that I was looking for with Dust Galaxy. People often think that I spend all my time submerged in electronic music, but I listen to and am influenced by a broad spectrum of music, People are quick to come up with labels to identify you with. The hardest thing is when you create your own label for yourself, and then try to break out of it - that's the real struggle."

Throughout the course of a year, most of that time spent in and around various London studios, as well as time in legendary Inner Ear studios, Garza set to bring his vision to life with an array of supporting musicians. Shawn Lee, Martin Duffy & Darrin Mooney from Primal Scream, Adam Blake of Cornershop, Jim Townsend (the People's Revolutionary Choir), Didi Gutman (Brazilian Girls), James Canty (The Make-Up, Ted Leo/Pharmacists), Jerry Busher (French Toast, Fugazi) all lent their talents to the record.

"The collaborative nature of the project allowed me the unique opportunity to work both in the studio and play live with artists whom I admire. It was a quite a change to be on the other side of the booth. I honestly feel like my perspective about music production in general has even evolved," he muses.

The result melds the sounds of psychedelic India, British paisley beats, post-punk, and roots rock into a riveting and unique combination.

Of course that history with Thievery Corporation is well documented.

"I bought my first synth at age 14; my father got a new job in Connecticut, which happened to have one of the only high school electronic music programs in the country. Hip-hop was really coming on the scene, so I started programming beats for fellow students. At that time I was listening to a lot of abrasive music where people were experimenting with sampling. It was an opening which I would find my way through. I remember putting out techno records in the early 90's and really being captivated with the new technology, then suddenly gravitating to bossa and jazz. He continues, "None of my peers could understand my new direction in any way."

Just at this turning point he met Eric Hilton at the infamous 18th St. Lounge, and they discussed the music they were passionate about and tried to amalgamate it with electronic elements, and the rest is history.

"Singing and playing guitar on a stage, fronting a band, is the last thing I thought I'd be doing when I began making electronic records fifteen years ago, and probably the last thing Thievery audiences would expect as well," states Garza. "I grew up in a very white, small, rural town in Maryland, but I also spent a lot of time in Juarez, Mexico (his mother is from Juarez) and spending time in Mexico with my relatives was always kind of confusing. For me personally being of Mexican-American background with French, Spanish, Arabic, Meso-American roots. I've never known where I fit in. maybe that was the beginning of my personal musical odyssey, continuously searching for different styles of music that resonated within."

In the end this may seem to be a more reckless endeavor for Garza, but it also may prove to be the most rewarding.